USPS Self-Driving Trucks: Innovative & Cost-Cutting– But is it Safe?

Starting this week, TuSimple self-driving trucks will attempt 22-hour journeys between distribution centers in Phoenix and Dallas traveling over 1,000 miles each way. Three TuSimple trucks will make a total of five trips carrying cargo along with a safety engineer and human driver.  They will monitor the truck’s performance and step in if needed. 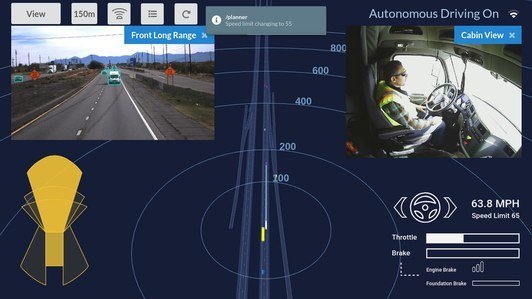 It is one of several pilots in Texas that are testing how vehicles driven by artificial intelligence software, cameras and sensors instead of people could decrease labor costs, increase fuel efficiency and make it easier for people and cargo to get around.

University researchers are also interested in testing out this new mode of transporting goods and people. Texas A&M tried its hand at evaluating how platooning commercial trucks — using one driver in an 18-wheeler to control a second truck that travels close behind  — could save money.

Concerned about how quickly this self-driving vehicle trend could come into regular play? Rest assured, there are numerous hurdles to jump over before autonomous vehicles become mainstream, from winning the public’s trust to bringing down costs. A crash of an Uber self-driving car that killed a pedestrian last year in Arizona raised concerns among some that the vehicles are simply too dangerous.

The public obviously has concerns over a 40-ton truck barreling down the highway without a driver. TuSimple claims that safety is the company’s number one priority, pointing out how their truck’s cameras and sensors can see about 1,000 meters and 30 seconds ahead, so the truck knows if it needs to slow down or change lanes.

Still, the public obviously has concerns about the idea of a 40-ton truck barreling down the highway without a driver in the front seat.

A shortage of truck drivers is helping to fuel the development of self-driving technology. According to the American Trucking Association, the driver shortage could reach 175,000 by 2024. The hope is that self-driving trucks could become an alternative in the trucking industry to staffing long-haul and overnight routes with people.

The public’s buying habits are also motivating the investment in self-driving trucks. Clicking on one- or two-day deliveries puts additional strain on a freight forwarding system that is already strained. The United States Postal Service processes and delivers 484.8 million pieces of mail each day, and they believe the pilot is “just one of many ways the Postal Service is innovating and investing in its future.”

“We are conducting research and testing as part of our efforts to operate a future class of vehicles which will incorporate new technology to accommodate a diverse mail mix, enhance safety, improve service, reduce emissions, and produce operational savings,” it said in a statement.

USPS did not reveal how much it is paying TuSimple for the pilot, but its reliance on the sale of postage, products and services must make up for the fact that it does not receive tax dollars for operating expenses.

Challenges Ahead for Self-Driving Trucks

While TuSimple has done most of its testing self-driving trucks in Arizona, this is its first test in the state of Texas. Both states have a regulatory environment that is friendly to autonomous vehicles. While most of the routes have been two to four hours long, the USPS pilot is TuSimple’s longest trip so far.

Biggest challenge has been designing sensors and hardware for fast-moving, heavy-duty semi-trucksTuSimple has worked with 15 customers, including Fortune 500 companies. It currently has its own fleet of self-driving trucks, but eventually plans to sell its software to truck manufacturers.

The company claims its biggest challenge has been designing sensors and hardware able to weather millions of miles on a fast-moving, heavy-duty semi truck.

With the USPS pilot, TuSimple hopes to learn more about how the trucks perform and how much money can be saved. Apparently, the trucks do not brake or accelerate frequently, like people do, so the hope is that it translates into fuel savings. The company also makes the argument that in the future driverless trucks could reduce road congestion as they could drive during off-peak times when there are fewer cars on public roads.

An Eye on the Latest Legal Developments

Attorney Mario Palermo of Palermo Law Group has protected the rights of car and truck accident victims and their families throughout since 1996. Through the years, Mario has kept pace with the latest legal trends and developments, including liability in self-driving vehicle accidents and among rideshare companies.

If you or a loved one has been injured as a result of a self-driving truck or car crash, we will conduct an immediate investigation to determine who was responsible for your accident. We will also identify all areas of compensation available to you and explore all of your legal options. From there, we can demand a settlement from the insurance company involved in your case and, if required, go to trial in order to obtain the compensation that you deserve.

Attorney Mario Palermo is a skilled personal injury lawyer for seeking fair compensation when injured by someone else’s negligence. We will administer your case from the start so you are able to receive full medical, personal and vocational recovery from your accident injuries.

Survivors of self-driving vehicle accidents can have a lengthy and painful road to recovery with overwhelming medical expenses, loss of wages, and/or permanent disability.  Please contact nationally recognized personal injury lawyer Mario Palermo at (630)684-2332 for a free consultation regarding the best approach to obtaining compensation for your injuries.