While teenagers aren’t always thrilled to have a GPS tracking app on their phone, and they are often quite vocal about it, many parents insist on this for peace of mind. To help support their case, parents around the world cheered when the tracking app “Find My Friends” recently helped save the life of 17-year-old North Carolina car accident victim Macy Smith. 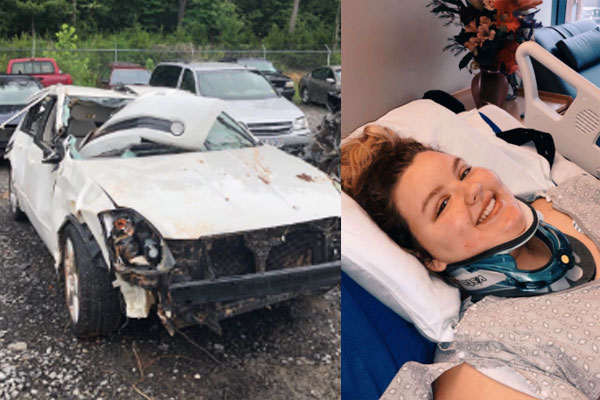 Smith’s mother, Catrina Cramer Alexander, decided to use the app to try and locate her teenage daughter after she had missed her curfew and calling her phone number. What the mother didn’t know was that Smith had been pinned underneath her car for more than seven hours, after her car crashed 25 feet down the side of the mountain and was unable to call for help.

I hydroplaned… down an embankment, flipped my car 3 times, and landed in my back seat with my arm pinned in between the car and the ground.When her daughter was not responding to any texts or calls from either her or her son, Alexander immediately began to panic stating that the lack of a response was “out of character for her.” She then got in her car and tracked her daughter to the location shown on the app. The GPS showed that her daughter had been in the same location for a long period of time. The North Carolina mom stated, “I can’t explain watching the GPS on my phone with my dot for my phone getting close to hers and then suddenly seeing the tire tracks.”

Upon arriving at the accident scene, she saw her daughter’s car had gone down a 25-foot embankment and was completely totaled. She immediately called 911. The teen stated that she will never forget the sound of her family calling out her name when they found her. Through a Facebook post she wrote: “I hydroplaned at 4:00 pm and ran in between 2 trees down an embankment, flipped my car 3 times, and landed in my back seat with my arm pinned in between the car and the ground. I have lost all of the nerves in this arm and cannot feel it at all.”

Smith said she couldn’t reach her phone when she was trapped. Fortunately, paramedics quickly arrived, provided immediate medical attention and rushed Smith to the hospital.  There, medics found broken bones; Smith had fractured her neck.  Her medical care included surgery to relieve swelling and pressure. The teen also suffered severe nerve damage in her left arm.  Both daughter and mother hope their story can encourage others to install the Find My Friends app to help keep each other safe.

Many car accident victims can have a lengthy and painful road to recovery.  On top of that, they have overwhelming medical expenses, frustrating insurance claims, loss of wages, and permanent or serious injuries.  If you’ve been injured in a motor vehicle accident, there are various laws that can help you or a deceased victim’s family receive compensation. Please contact Palermo Law Group at (630)684-2332 to for a free consultation with nationally recognized personal injury lawyer, Mario Palermo, regarding the best approach to obtaining compensation for your injuries.