GAUTIER, MS (March 6, 2019) – A Tulane University student was killed after two tires flew off from a passing 18-wheeler tractor-trailer and struck her at a Mississippi rest stop on Tuesday. 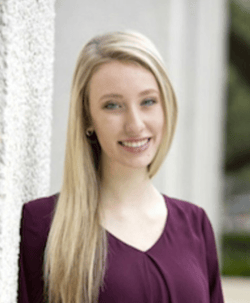 Margaret Maurer, originally from Forest Lake, Minnesota, was with her friends at a rest stop in Mississippi before the tires hit her, their car and another vehicle.  The rest stop was on Interstate 10 eastbound in Gautier, Mississippi and the tractor-trailer was headed westbound.

The 21-year-old victim, an ecology and evolutionary biology major at Tulane University, and her two friends were about to get back into their car at a rest stop on eastbound I-10 in Gautier when the tires hit her, their car and a nearby SUV.

The wheels, weighing roughly 1,000 pounds each, traveled between 850 and 875 feet after breaking off the truck.  They traveled another 100 to 150 feet after striking Mauer. It is unclear why the wheels flew off the truck.

The driver reportedly saw first responders at the rest stop and pulled over. Police said he was aware he’d lost his tires but didn’t know they’d struck the woman.

According to seasoned Illinois truck accident attorney, Mario Palermo, of Palermo Law Group, crashes caused by wheels coming off of vehicles are commonly referred to as “wheel runoff crashes”. “There are usually two main causes wheel runoff crashes. One is a failure of the wheel mounting system, such as the wheel studs, lug nuts, etc. and the other is a failure of the hub and wheel bearing assembly. Most commonly, these failures are related to improper or deferred maintenance, but some are also linked to manufacturer’s defects.”

Attorney Palermo also added, “Wheel system failures are usually caused by the improper installation of a wheel that causes it to be loose or become loose. A loose wheel causes the wheels studs to break and the wheel and tire to separate from the vehicle. Many root causes lead to loose wheels, but most of them are associated with over-torquing or under-torquing the lug nuts.”

Margaret Maurer was planning to graduate in May to pursue a career in scientific illustration. According to Tulane, and all who knew her, she was an extraordinarily gifted student and leader among her peers. She will be remembered as someone who touched many lives and had so much talent at such a young age.

“She was well loved by her friends and especially her little brother. They’re 11-and-a-half months apart, so they’ve never known the world without each other,” said her grieving mother, Tracy Nelson.

The investigation is ongoing.