Marijuana Users Have a New Reason to Think Twice

You’ve heard of the breathalyzer test for alcohol, now marijuana DUI test technology has arrived, and it is coming for drivers who use marijuana. Much like you can receive a DUI for drinking alcohol, you can also get a marijuana DUI.

With the recent legalization of recreational marijuana use in Illinois, marijuana breathalyzers are gearing up to hit the market. While the cost is currently unknown, they will be similar to alcohol breathalyzers. When the technology debuts, it will be easier for police to put the brakes on impaired drivers.

Researchers at the University of Pittsburgh, where the technology is in development, admit a blood test is still considered the gold standard of testing for marijuana. However, they hope their new technology will now help law enforcement identify impaired drivers with a breath test. 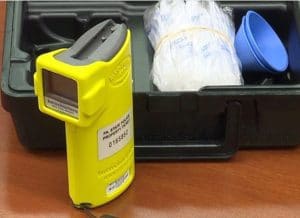 The prototype looks similar to a breathalyzer that looks for the influence of alcohol, with a plastic casing, protruding mouthpiece, and digital display. A traditional breathalyzer tests the blood alcohol concentration (BAC) of a driver, but marijuana breathalyzers tests for the presence of tetrahydrocannabinol (THC) in a driver’s system, which is the active chemical in marijuana. It was tested in the lab and was shown to detect the THC in a breath sample that also contained components like carbon dioxide, water, ethanol, methanol, and acetone.

The researchers will continue to test the prototype but hope it will soon be manufactured and available for use. Creating a prototype that would work in the field was a crucial step in making this technology applicable. The next step is to use the prototype device to measure as many volunteers as possible to see how accurately the machine learning model is able to distinguish between THC and non-THC components.

It’s up to legislators to determine what level of THC equals intoxication, but the device is an important step in helping to make that decision. Illinois already has a law on the books that makes drivers with THC blood concentration of five nanograms per milliliter or more guilty of driving under the influence, regardless of whether the driver is impaired.

Current drug testing methods rely on blood tests, urine tests or hair samples, which cannot be done in the field. These tests only prove the recent use of marijuana, not that they are currently under the influence.

In states where marijuana is legal, you’ll see road signs that say, “Drive High, Get a DUI,’ but there has not been a reliable and practical way to enforce that. There are debates in the legal community about what levels of THC would amount to impairment, but creating a device for a marijuana DUI test is the first step toward making sure people don’t partake and drive.

In Illinois, a driver may not operate a motor vehicle while impaired by the use of cannabis, whether used medically or recreationally. Cannabis may only be transported in a vehicle in an odor-proof and child-resistant container. No driver or passenger may use cannabis in a motor vehicle. If a police officer stops a vehicle and the officer has reasonable suspicion to believe the person is impaired by the use of cannabis, the driver must submit to field sobriety testing and/or validated roadside chemical tests.

Refusal to submit to testing or failure of field sobriety tests and/or validated roadside chemical tests will result in the suspension of the person’s driver’s license.

It’s important to know the risks of driving while high, as well as the legal consequences. According to Driving Laws, a driver convicted of a marijuana DUI can be fined $500-$2,000 and receive up to a year of jail time.

Once a driver is pulled over by police and they suspect a DUI, the officer will look for signs of intoxication which indicate that an individual could be driving under the influence of Marijuana. Outlined below are 8 of the most common driving while high signs police look for:

Medical and recreational marijuana has been legal in states like California, Washington, and Colorado for years. In those states, defense attorneys have already identified the best legal defense against a marijuana DUI charge: police not having probable cause to stop a driver. Although law enforcement looks for the signs that a driver is under the influence of marijuana, just the odor of marijuana alone is not necessarily enough to charge a driver with a crime.

Illinois drivers and cannabis users should know their rights when it comes to marijuana DUIs, as well as the regulations for driving with legal weed. Since the recent Illinois legalization and the development of the new breathalyzer test, police are ready to make DUI arrests. With these new developments, some fear the possibility of fighting a false DUI case in court, with Fight DUI Charges claiming that sober drivers are sometimes wrongfully arrested for DUI charges.

The breathalyzer test is not the only marijuana DUI test device out there. A new test uses a swab that retrieves saliva from the mouth and detects drugs in five minutes. The test results not only detect marijuana, but also illegal, psychoactive drugs such as amphetamines, opiates, and cocaine. It is unclear if this roadside test will stick as a regular practice for Illinois cops.

Whether the breathalyzer or the swab will be the new gold standard of marijuana DUI tests for cannabis impairment is yet to be determined. Illinois drivers and law enforcement are adjusting to the new legislation while lawmakers decide what levels of THC indicate impairment. As legislation and regular practices develop, it is important for Illinois drivers to be aware of these changes.

Many accident victims who were injured by an impaired driver can have a lengthy and painful road to recovery with overwhelming medical expenses, loss of wages, and/or permanent disability.  If you’ve been injured in a motor vehicle accident, there are various laws that can help you or a deceased victim’s family receive compensation.

Please contact Palermo Law Group at (630)684-2332 for a free consultation with nationally recognized personal injury lawyer, Mario Palermo, regarding the best approach to obtaining compensation for your injuries.