Can I Sue for Being Hit by a Semi Truck?

When a driver suffers a personal injury after a car accident with a semi-truck, they often wonder if they are able to sue to recover compensation for damages they have suffered. The ability to sue for being hit by a semi truck often comes down to the negligence the truck driver exhibited in the events that led to the accident. If you are considering filing a truck accident claim, we’re discussing everything you need to know in this blog.

Often, victims who suffer truck accident injuries are understandably distracted by the need to procure medical treatment, arrange for time off from work, and other arrangements at home to account for their healing. This can mean that considering filing a personal injury lawsuit against the trucking company may not happen until much later after the date of the accident.

In Illinois, there is a statute of limitations that accident victims must adhere to when planning to file a personal injury lawsuit. Victims in Illinois have two years after the date of the accident to file a lawsuit. Attempts made after the two-year timeframe are likely to not be honored by the court system. This means that accident victims should speak with an experienced local truck accident lawyer as soon as possible after an accident.

In the United States, the Federal Motor Carrier Safety Administration (FMCSA) maintains annual data on the number of accidents and fatalities involving semi-trucks. In 2019, 5,237 large trucks and buses were involved in fatal accidents, representing a 2% increase from the previous year. In addition, between 2009 and 2019 there was a 47% increase in the number of fatal crashes involving large trucks and buses.

As you can see from the data collected by the FMCSA, crashes involving large trucks are a significant cause for concern. The risks of fatality, personal injury, and/or property damage are ever present when passenger vehicles share the roads with large transport vehicles such as semi-trucks.

Blind spots contribute to accidents between semi-trucks and passenger vehicles in a number of ways. One common cause of accidents occurs when motor vehicles are following each other too closely, whether in front or behind a semi-truck. Semi-trucks need a much longer stretch of road in which to slow down, meaning a passenger vehicle that stops abruptly in front of a semi-truck may not be able to avoid being hit from the rear. On a similar note, cars that follow too closely behind a semi may not be ready to brake at the same frequency that truckers do, leading to a collision.

Truck driver fatigue is another common cause of accidents, especially those involving commercial trucks. Fatigue can lead truck drivers to make careless mistakes including not completely assessing their blind spots for signs of danger. Truck drivers are expected to sit for prolonged periods of time, often at hours of the day that do not align with their normal sleep schedules. This can cause impaired judgment, leading to accidents on the road.

Sudden lane changes constitute another common cause of accidents between semi-truck drivers and passenger vehicles. When either party commits a sudden lane change, it can cause a change reaction of reflexive maneuvers that can cause drivers to lose control of their vehicle. Truck drivers should take prolonged precaution to ensure there is not a vehicle in their blind spots before executing a lane change.

Finally, distracted driving can cause accidents between semi-trucks and passenger vehicles.  When a truck driver is distracted by their phone or something else, it can lead to absent-minded decision making that rarely includes due attention to the truck’s blind spots. 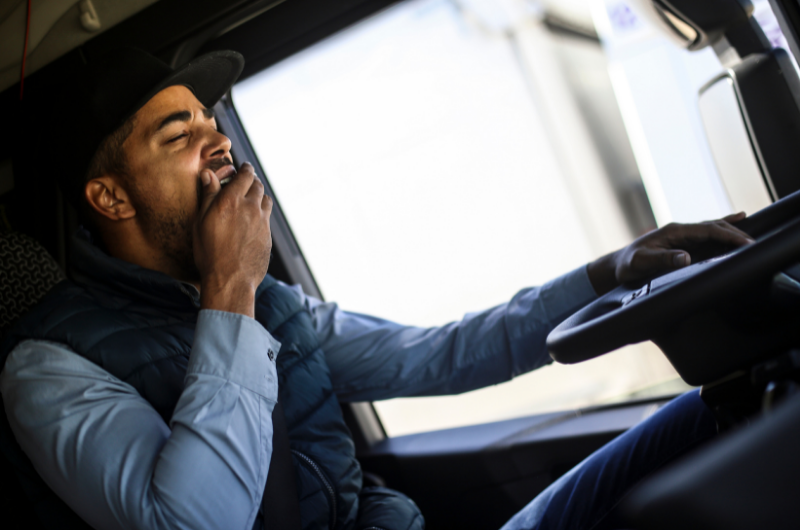 When the driver of a passenger vehicle is involved in an accident with a semi-truck and suffers a serious injury as a result, they are likely going to want to understand their options for pursuing a truck accident lawsuit in order to recover compensation for any damages incurred as a result of the accident.

For most auto accident cases, the plaintiff is seeking compensation from the at-fault driver’s insurance company, but with commercial truck accidents you’ll likely be dealing with the trucking company itself. To successfully recover compensation, a plaintiff and their legal team must be able to prove to the courts that the semi-truck driver was acting in a negligent manner in the events leading to the accident. For example, if the driver was under the influence of drugs or alcohol in the moments leading to the crash, a truck accident attorney may argue that this is negligent behavior and therefore the driver and/or their company may be liable for compensating the injured victim.

To improve accountability and reduce liability from false claims, many trucking companies equip the cabins of their vehicles with two-way dashboard cameras (i.e. dash cams). These cameras can be used as evidence to determine whether or not the driver was being negligent. In addition, drivers of passenger vehicles may consider purchasing a dash cam of their own, especially if they frequently share the road with a high number of semi-trucks. In the event of an accident, the evidence gained from these devices can help courts quickly determine fault.

Illinois state law uses a doctrine of fault determination known as “modified comparative negligence.” Under this system, an injured party can only recover damages if he or she is less than 50% responsible for the events that ultimately lead to the accident and subsequent incursion of personal injury. If they are deemed by the court to be 50% or more at fault for the accident, then they will automatically forfeit their ability to recover compensation from the defendant for any expenses related to the incident.

One important consideration regarding the modified comparative negligence model of fault determination is that the amount of compensation a plaintiff is eligible to receive is intricately tied to the proportion of fault assigned to them by the court and judge overseeing the personal injury case.

For example, if a plaintiff is determined to have been 40% at fault for an accident that resulted in personal injury (perhaps the plaintiff was shown to have been engaging in distracted driving at the time of the accident), then this person is still eligible to be awarded compensation by the court. However, whatever final award amount the court determines is appropriate given the extent of the damages will be reduced by 40% in order to reflect the plaintiff’s role in the accident. If the plaintiff in this case was eligible for $10,000 in compensation, they would ultimately receive only $6,000 in damages.

The amount of compensation that you may be eligible to receive will depend on many factors, including the severity of your injuries, the extent of your damages, and the laws in your state. An experienced personal injury attorney can help you understand the types of compensation that may be available to you and fight for the full amount of damages that you deserve.

When planning to pursue litigation after an accident in which a truck driver’s negligent driving caused personal injury to other drivers, it is often necessary to employ the services of an experienced local personal injury attorney. These legal professionals are able to help truck accident victims to better understand how negligence laws operate with respect to their case, and they can help plaintiffs build a strong portfolio of evidence that proves the trucking company’s negligence.

For years, the personal injury lawyers at the law firm of Palermo Law Group have been working with accident victims in Oak Brook and throughout the Chicagoland area as they fight for fair compensation for their injuries. If you are seeking expert legal advice for yourself or a loved one, contact Palermo Law Group today for a free consultation.