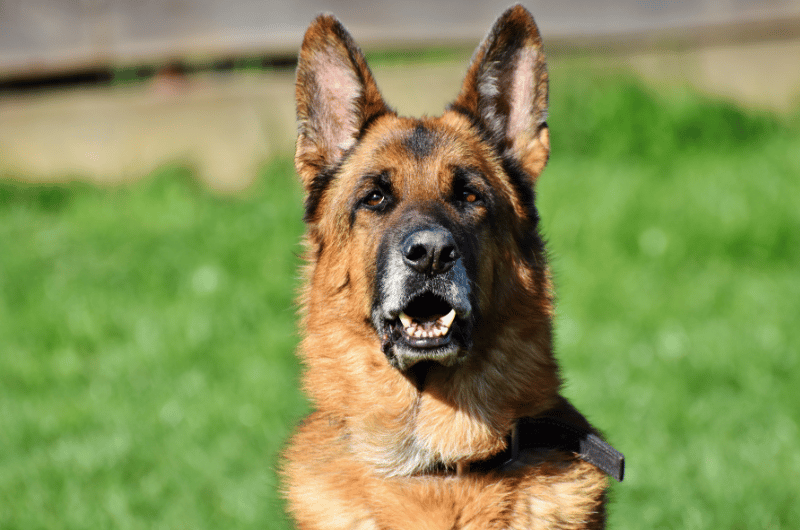 According to information provided by the American Veterinary Medical Association (AVMA), more than 4.5 million people are bitten by dogs each year in the United States. And approximately 1 in every 5 people bit by a dog required medical attention for their injuries. While any dog can be capable of biting a person, there is historical evidence to suggest that there have been a few select breeds of dogs that are responsible for the majority of attacks and subsequent personal injury to humans. Or at the very least, dog attacks from certain breeds tend to be reported more often than other breeds, likely due to the severity of the wounds. One of these breeds is the German Shepherd. In this blog, we’re diving into some background information on the risks German Shepherds pose to people, followed by some baseline guidance on how to treat German Shepherd bite wounds. A skilled personal injury attorney can help victims of German Shepherd bites recover compensation for their injuries and other damages.

In a 2019 study conducted by the Ohio State University, researchers combed the scientific literature from 1970 to the present to locate all papers that reported data on dog breeds involved in attacks to determine the relative risk of receiving a bite from a particular breed of dog. By combining this data with associated hospital data on the damage incurred to victims, a damage severity scale was also created.

German shepherds rounded out the top three breeds identified in the study, with 17.8% of reported bite incidents involving this breed. The researchers indicated that, as with other breeds, the majority of dog bite incidents occurred with children and in the family home, with the family dog. Invading the dog’s personal space and teasing/physically contacting the dog inappropriately were listed as common causes that provoked an attack. 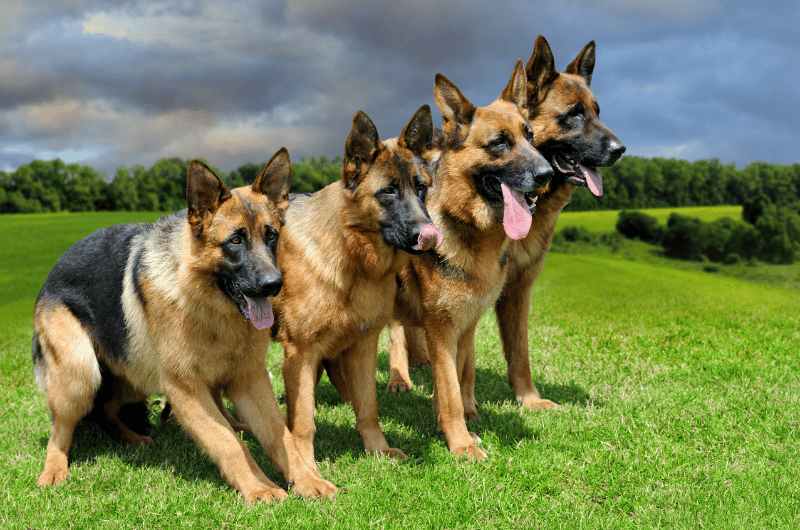 The history of the German Shepherd breed can be traced back to 1889, according to the American Kennel Club (AKC). The dog was bred for its herding tendencies, intelligence, and ability to take directions quickly and efficiently with minimal training. Ultimately, the goal was to create the perfect working dog.

During World War I, the German Shepherd was used as a war dog by the German forces.  American troops eventually brought many of these dogs back to the states from Germany. Over the years, this breed has been employed by militaries and police units doing work in bomb and drug detection, K-9 partnering, and message carrying. The intelligence and calmness of the breed have also led to its use as seeing eye dogs, medical assistance dogs, and therapy dogs.

It is this helping nature of German Shepherds that ultimately leads it to consistently be placed among the top breeds when looking at injuries and fatalities from bites in a given year. That may sound like a contradictory statement, but their loyalty is often the cause of attacks. By serving their owners, these dogs can be prone to attack others in the name of defense or law enforcement purposes. Let’s also not forget that German Shepherds have a bite force of 238-291, one of the highest of any dog, so bites from this breed are more likely to break the skin. Since German Shepherds have a high bite force, large teeth and the possibility of complications such as nerve damage and scarring are much higher than they would be with a bite from a smaller and less powerful dog.

How to Treat a German Shepherd Bite Wound 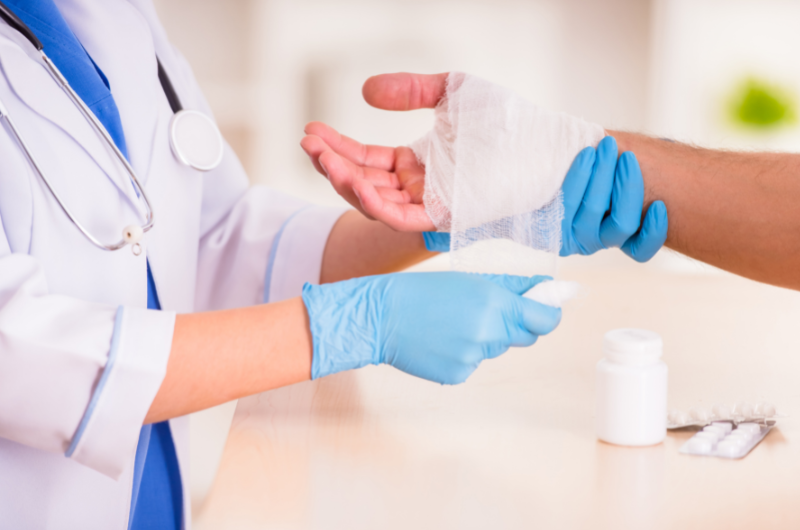 When it comes to treating injuries from German Shepherd dog bite wounds, the process likely won’t be different than treatment for any other type of dog bite injuries. Especially in comparison to other large dogs with strong bite forces such as pit bulls, Dobermans, etc. Initial wound management by a healthcare physician involves taking a health history of the patient, as certain pre-existing conditions can leave the bite victim at an increased risk for infection or other complications from the dog bite.

Other critical information to gather includes the patient’s tetanus immunization status, current medications, and allergies. If you were not bitten by a stray dog, it’s also worth checking into the dog’s immunization status and whether the owner gave them the rabies vaccine. Then, after documenting the size and classification of the wound and the range of motion affected by the injury, the physician will begin intensive irrigation of the wound area to reduce the risk of infection. Avoiding the development of an infected bite should be one of your doctor’s top priorities, as the bacteria and germs within a dog’s mouth present a high risk to you if they enter the wound.

Next, the doctor will debride and remove any dead or damaged soft tissue, but extreme care is needed to avoid removing excess tissue. The excess removal of tissue can have long-standing implications for wound closure and the facial appearance of the victim. In addition, antibiotic treatment may be started for patients who are either at an increased risk for infection or have suffered particular kinds of dog bites. Crush injuries and puncture wounds are more likely to become infected compared to scratches or lacerations.

In extreme cases, outpatient treatment for infection fails and the dog bite victim must be hospitalized and provided with antibiotics intravenously. Finally, if the injury from the dog bite results in a highly visible facial wound, consultation with a maxillofacial or plastic surgeon may be advised or required.

It’s always best practice to seek medical treatment for a German Shepherd bite wound as soon as possible. But if you don’t have access to a hospital immediately, here are a few essential things to do before you get treatment: 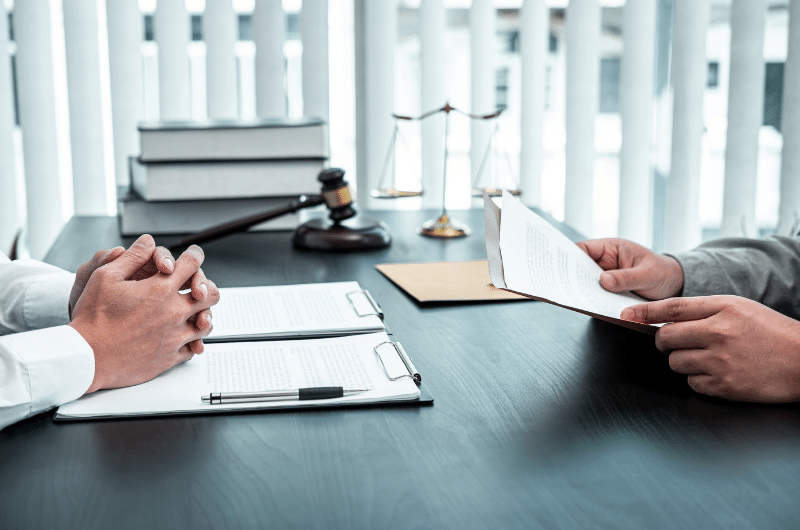 For dog bite victims in Illinois to successfully recover monetary compensation for their injuries, it’s useful to have an understanding of how Illinois dog bite laws work. Often, this is best accomplished through consultation and collaboration with an experienced local personal injury attorney.

Illinois dog bite laws follow a “strict liability” rule for fault determination. As long as the dog bite victim was legally on the property where the bite occurred and was not attempting to provoke the dog in any way in the moments leading to the attack, the dog’s owner is likely to be held liable for any injuries suffered by the plaintiff. Even if the dog’s owner took all reasonable precautions in the moments leading up to the incident, they will still likely be held liable for the injured plaintiff’s medical bills, pain and suffering, and other damages.

In comparison to Illinois’s “strict liability” dog bite laws, other states instead employ a “one bite rule.” In one bite rule states, only dog owners with dogs who are known to be dangerous (from previously biting a person) are held liable for damages. In other words, Illinois and other states that use a strict liability doctrine for dog bite attacks are not as forgiving when it comes to holding dog owners accountable for the behavior of their animals.

An important point for prospective plaintiffs to remember before deciding to pursue litigation after a dog bite attack is the important role of negligence in the ability to ultimately recover compensation for their injuries. As the state’s laws indicate, a dog owner is liable for a bite victim’s injuries as long as the victim was legally allowed to be on the premises and they were not provoking the animal. In other words, if the plaintiff was trespassing on the property or antagonizing the dog in any way, they may forfeit their ability to recover monetary compensation for any injury as a result of the dog’s actions.

As with any animal bites, dog attacks can be a traumatic and life-changing event, no matter the age of the victim or the severity of the bite. For years, the dog bite attorneys at Palermo Law Group have been helping dog bite victims in Oak Brook and throughout the Chicagoland area as they navigate their way towards monetary compensation for their damages. Contact Palermo Law Group today to discuss your case.