Will Chicago bike accidents and deaths continue to rise in 2023?

The coronavirus pandemic and the resulting lockdowns have affected many aspects of our daily lives. One of these is the increase in the number of cyclists on the roadways. Whether you picked up the cycling habit after the pandemic or before, you may have experienced the long lines at your local bike shop. If you ride your bike on local roads, you have probably noticed how crowded they can get. Unfortunately, along with the increase in commuters traveling by bike, there has been an increase in accidents involving cars and bicycles. Fatality rates have also risen dramatically in recent years, mostly due to car accidents. Whatever the reason for the increase, whether negligent driving, reckless driving, or poor infrastructure, there can be no denying that cars account for most Chicago bike accidents. No other cause even comes close.

Chicago has long been a city with many bikers, despite the questionable safety conditions. That’s never been more obvious than it has this year, as an uptick in bike accidents has caused concern. Will it continue, or will the City of Chicago make biking safer?

Infrastructure Issues May Be Behind Recent Uptick

The main factor believed to be driving the upsurge in bike accidents is likely infrastructure issues. Bike accidents are primarily attributable to the fact that automobiles and bicycle riders are forced to occupy the same spaces and compete for the road. Though we all try to “share the road,” attitudes toward the situation can get hostile on both sides of the fence. Bike riders experience anxiety, fear, and a risk to their lives by being forced to share roads with cars, and car drivers loathe the inconvenience of having to go around slow bicyclists or be stuck behind them. Bike lanes help the situation, but only to an extent, especially when, in some areas, cars are permitted to stop in bike lanes or even park in them, causing hazardous conditions ripe for bicycle injuries or fatal collisions.

Most cities around the US are attempting to produce better biking infrastructure to meet the heightened risk of harm experienced by cyclists. There is some concern among cyclists that the efforts are too little, too late, as infrastructure improvement is often undertaken in areas in which cyclists are seriously injured or killed. Cyclists often advocate for a proactive approach and for more proven approaches such as dedicated bike paths or concrete barriers.

State and federal law include statutes that prioritize the safety and right of way of cyclists. Illinois laws around bicycle safety are intended to keep cyclists safe as they are disproportionately at risk of harm by irresponsible motorists.

However, the reality is that while cycling in the presence of cars, cyclists should take every possible precaution to maintain their safety. Despite the fact that drivers should go out of their way to make sure that cyclists are not harmed, this ideal situation is not always the reality. Reckless drivers do exist, and while accidents are often their fault, the cyclist will be the one left with lasting injury or the one who suffers a fatality.

A Look at Statistics and Cases of Bike Accidents and Death

Bicycle crashes in the US have been steadily increasing since as far back as 2011. In 2020, according to the National Safety Council, 1260 cyclists were killed, which is a whopping 16% increase from the year before, and a 44% increase from the last decade. New data shows that cycling fatalities have increased by another 5% in 2021.

These figures are alarmingly high, and they do not compare well to our counterparts in Europe. In 2020, the US had six cycling deaths per 100M kilometers. Compare this to the UK’s 1.6, Germany’s 1, and Denmark’s 0.9 per 100M kilometers. There are a variety of possible reasons why bike deaths are so much more common in the US than in Europe, but the primary reason is likely to be poor cycling infrastructure, especially for winter cyclists.

In the US, cycling outside is a highly seasonal activity, not only because of the cold but also because there is a lack of well-maintained cycling paths and well-designed and safe bike lanes. This usually means cyclists pack it up for the season and take on other recreational activities.

In Chicago, in 2022, there have been at least three cycling fatalities. A cyclist was struck by a vehicle in the 3800 block of North Milwaukee Avenue in the Old Irving Park neighborhood on the Northwest Side in May of this year. The rise in cycling fatalities and injuries signals a crisis for cyclists who expect to go out on the streets and return home safely. Cycling infrastructure advocacy groups often fill their ranks with the relatives of accident victims and with those who have suffered close calls of their own.

Chicagoans averages about six cycling deaths per year, and in the year 2020, there were eight fatalities. This may not sound like a high amount of deaths, but cycling deaths should be an extreme rarity, especially in a city with adequate infrastructure. Policy decisions should focus on the preventability of cycling deaths and focus on improving cycling laws and infrastructure to efficiently promote safety.

Why Bikers Should Have UIM (Uninsured Motorist Coverage) 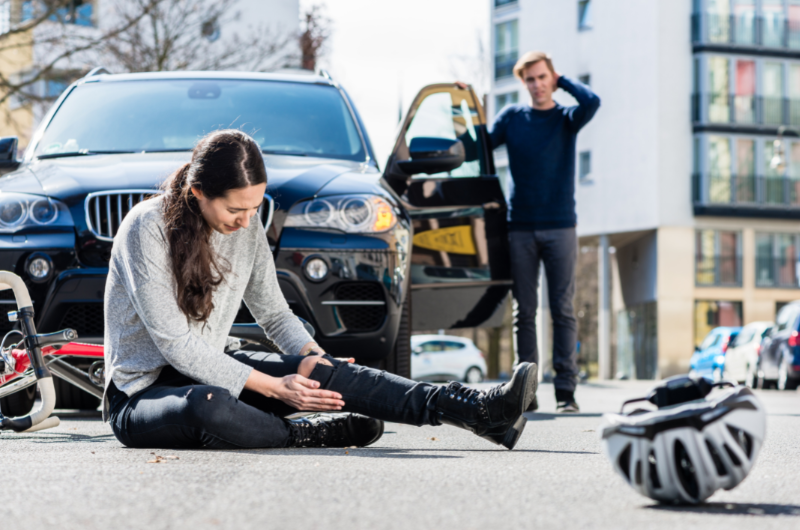 While we hope it never happens, hit-and-run crashes do happen, where drivers do not stick around to wait for the consequences. In these cases, or in cases where a driver has no insurance, it is important to be protected by uninsured motorist coverage. Uninsured motorist coverage will cover medical bills or other incurred costs from an accident in the case of a hit-and-run or in instances when a motor vehicle driver is underinsured or uninsured entirely. We at Palermo Law can help you get compensation, but it is almost always best to go through an insurance policy first. Likewise, we cannot help to acquire compensation if a motorist has fled the scene and cannot be identified. In these cases, UIM will be your saving grace and one of the most important elements of your insurance policy.

In most cases in most states, you do not need to have a policy for your bicycle in particular and can gain the benefits of UIM simply by choosing favorable limits on an auto policy. In some states, you do not even have to have a car in order to benefit from UIM; you need only be listed as an additional insured on the policy of the housemate.

It is common for insurance companies to mistakenly fault cyclists for the cause of bike crashes, either due to a lack of knowledge of cycling laws and regulations or other reasons. If you feel that you deserve compensation in a cycling accident incident that you have not received, you should pursue litigation.

Cycling should be a safe opportunity to get some much-needed exercise. Cycling should be a safe, reliable, eco-friendly, and efficient commute option. The recent uptick in severe cycling accidents is an unfortunate trend. You deserve to feel safe and more importantly, to be safe. Irresponsible drivers do not deserve to walk away without consequences. Seeking justice for cycling accidents promotes not only your well-being, safety, and happiness, but that of others in your community. If you or a loved one has been the victim of a Chicago biking accident, contact the Chicago bicycle accident attorneys at the law firm of Palermo Law Group.

For years, the personal injury lawyers at Palermo Law Group have been helping cycling accident victims in Oak Brook and throughout the Chicagoland area as they navigate their way toward monetary compensation for their damages. Contact Palermo Law Group for a free consultation.